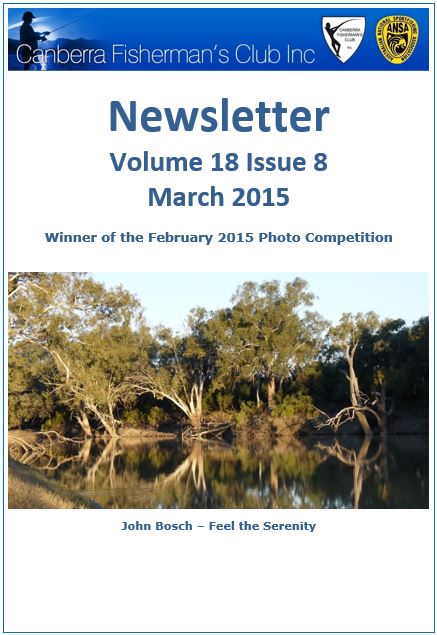 It has been a very busy period for the club as always when we are holding our biggest event of the year, maintaining our regular outings, keeping on top of general business and still getting some fishing done at the same time.

Firstly, another successful outing for the club and a good turnout at the Narooma Convention for all that attended, it's always great to see the club and its members up there in the running for this event. More on our Narooma outing in another great article from Anthony later.

Canberra Carp Out 2015 final preparations and processing of entries were definitely the things that took up most of the committee’s time this month. With the hurdles still coming to the end, was certainly demanding for all concerned. My being away in Tasmania for a week for work also added a little more stress that really was not needed. So, a big thank you to the committee in particular Anthony, John, Sarah, Kevin and Luke for extra efforts during the lead up to the event, especially while I was away.

Read the March 2015 edition of the Canberra Fisherman's Club Newsletter