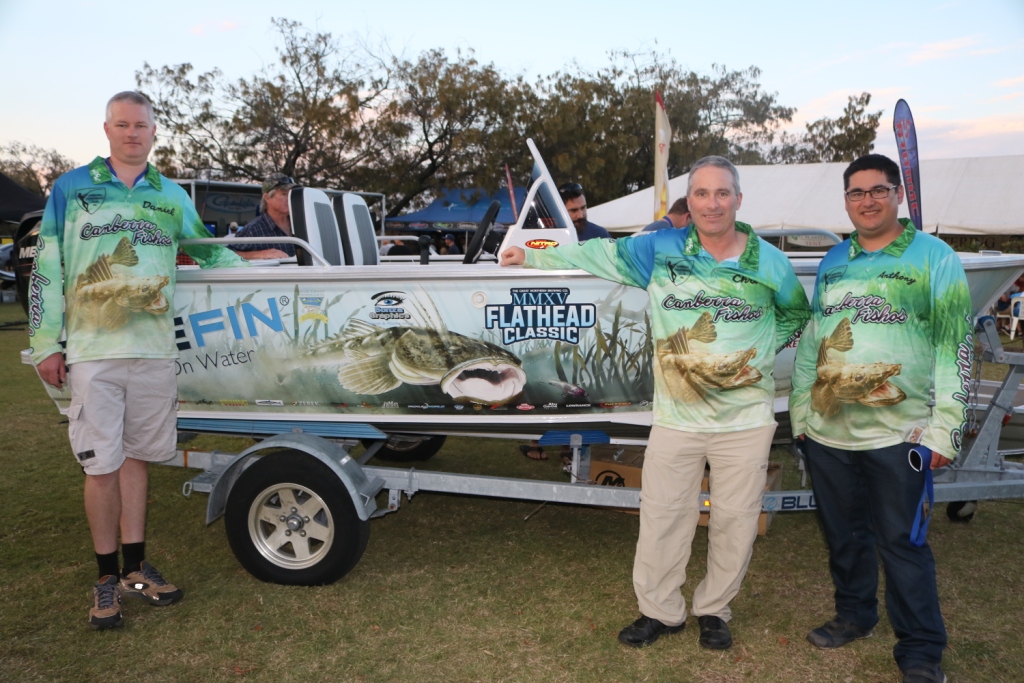 Team Canberra Fishos proudly represented the Canberra Fisherman's Club at the 22nd Gold Coast Flathead Classic held on 30 September - 3 October 2015.  This year, the Gold Coast Flathead Classic was attended by 551 competitors making up 215 teams. For Team Captain Chris Head, this was his fourth time in attending this tournament while fellow team mates Anthony Heiser and Daniel McNeice fished the event for the first time. Despite being 1150 km north of their usual stomping grounds, Team Canberra Fishos caught and released 40 fish to come home with a Top 20 finish.

We arrived at Chris's parents house at Paradise Point around 7.30 pm on Monday night after a long drive that started at 3.30 am that day.  After spending the Tuesday resting after the drive and getting our fishing gear and Chris's boat ready, we had a late Wednesday morning pre-fish between the Gold Coast Seaway and Crab Island. The pre-fish was uneventful although I landed a small Watson's Leaping Bonito on soft plastic and Daniel landed a half-metre Flathead on the troll.

Anthony with a Watson's Leaping Bonito that spat out its breakfast as its photo was being taken.

Chris's sister Carol and her partner Sean were also competing in the Gold Coast Flathead Classic and we joined them at the Gold Coast Sportsfishing Club on Wednesday Night for registration and dinner. During the evening, Merv Hughes provided some light entertainment and the Gold Coast Sportsfishing Club then reminded everyone of the rules of the competition. Firstly, that this was a catch and release competition only and that all captures (Flathead or otherwise) had to be released alive. In addition, only lures and flies were permitted.  Flathead of 40cm or longer and other species in consideration for the longest fish category must be photographed on the tournament sticker with a digital camera. Scores were allocated to each fish according to their length as indicated on the tournament sticker. Fishing commenced at 6.30 am on Thursday, Friday and Saturday and finished at 4.00 pm on Thursday and Friday and at 2.00 pm on Saturday.

After dinner and registration, we all returned to Chris's parents' place where Chris presented Carol and Sean with a fish measuring tube that he and Daniel had made back in Canberra.  We also had one for our boat and while they adorned the measuring tubes with the tournament stickers, I inspected the goodies in our team show bag.

Fishing got off to a great start on Thursday morning with Chris landing a 69 cm Flathead on the troll within the first fifteen minutes of fishing followed by my 50 cm Flathead five minutes later. Chris landed another on soft plastic not long after, albeit undersized but still worth an additional five points.  I got a couple of undersized Bream on the troll followed by what felt like decent Flathead.  Daniel then hooked up on a 46 cm Flathead just as he started winding in his line to help me land my fish.  Once Daniel's fish was measured, photographed and released, he and Chris then helped me net my fish, which turned out to be a 36 cm Estuary Cod.

In the afternoon, Chris took us to his special Flathead spot that won his team the ‘Away Team’ Trophy last year. We spent the rest of the afternoon trolling in less than one metre of turbid water with Micro Mullets and Pig Lures. It was certainly a productive spot and Daniel landed the best fish for the afternoon – a 69 cm Dusky Flathead that destroyed his Pink Micro Mullet. Jim Harnwell from Fishing World Magazine and Ian ‘Big E’ Phillips who were fishing the same spot also did well there, with Big E catching and releasing an 85 cm Flathead before our very eyes. We finished the first day of fishing with a total of 703 points putting us in 14th place overall. Out of the 489 senior anglers, Daniel was placed 38th, Chris was 70th and I was 267th.

On Friday morning, our plan was to fish the clearer water near the Jumpinpin Channel in the morning and return to Chris’s special Flathead spot in the afternoon. I was rather excited to finally see the Pin. Growing up in South-East Queensland, I had always heard great stories about the Pin but never got the chance to visit it.

If ever asked in a pub quiz, the Pin was formed in 1896 when the 75 metre barque Cambus Wallace ran aground on Stradbroke Island and its cargo of explosives detonated. This left a huge crater on the beach which eventually split Stradbroke Island into North and South Stradbroke Islands thus creating the Jumpinpin Channel. Unfortunately, Team Canberra Fishos found this information useless when it came to locating and landing Flathead.

The Pin was very scenic and the water was a clear shade of Bombay Sapphire Gin. However, it was crowded with boats chasing metre Flatheads and we quickly discovered that our one ounce jigheads was no match for the currents. So we had a morning tea break and I took the opportunity to photograph some of the bird life.

Afterwards, we returned to Chris’s special Flathead spot. While it was not as scenic as the Pin and less likely to hold metre long lizards, the special Flathead spot immediately produced fish. Chris caught and released six fish (the biggest measuring 59 cm), Daniel landed two fish (including our biggest fish for the day measuring 62 cm) and I landed three (the biggest measuring 50 cm). We finished the second day of fishing with 739 points. This brought our overall total to 1442 points, keeping Team Canberra Fishos in the Top 20 at 17th place.

On day 3 of the Flathead Classic, Team Canberra Fishos devised a game plan to fish the deeper channels until the tide allowed us to fish the special Flathead spot and aim for a catch rate of 140 points per hour to reach our target of 1000 points for the day.

Under this game plan, Daniel also gave me strict instructions: no more wildlife photography! However, Daniel kindly relaxed this edict when we spied an Osprey with a Bream firmly in its talons. However, we were not the only ones to spy the Osprey and Bream. The Bream attracted the attention of the resident White-bellied Sea Eagle and a Whistling Kite which then engaged in spectacular air to air combat with the Osprey.  Eventually, the eagle and kite flew off and the Osprey started flying towards us...which was then when I decided to quickly grab the camera and start shooting away. The Osprey briefly rested on a green beacon before taking off and flying back the way it came...only to lose its Bream when it got ambushed by the White-bellied Sea Eagle.

The first two hours of the morning more or less went according to plan with Daniel and I landing eight fish by 9 am in the channel. Chris dropped a few fish as well but he was not the only one to do so. What would have been my best fish for the tournament evaded several netting attempts before it finally spat the hook. It was not long before the boats that had been trolling the other side of the channel made their way to our side of the channel. Some anglers did well, although one boat wasted half an hour assisting one of their crew members land what turned out to be a rather large stingray.

It was not till 10.30 when we finally managed to reach our fishing spot. Chris finally broke Team Canberra Fisho’s 90 minute Flathead drought with a 46 cm fish. Our special Flathead spot produced another four fish between us, the biggest being Daniel’s 59 cm Flathead and my best fish for the tournament being a 55 cm Flathead.

Fishing came to an end at 2 pm and we finished the day with 13 fish and 556 points, well below our target of 1000 points. This brought our total score to 1998 points and we made our way to the tournament HQ for the final supper and presentation wondering if we retained our spot in the top 20.

An impressive crowd gathered at the Tournament HQ, enjoying the light entertainment from Merv Hughes while the results were being calculated by the Gold Coast Sportsfishing Club. Eventually the winners were announced and the results were as follows:

The Champion Away Team was Beer & Bullshit with 2112 points – with Team Canberra Fishos coming a close second with 1998 points. In addition, we retained our spot in the Top 20, coming 18th overall. Out of the 489 senior anglers, Chris Head came 39th with 889 points, Daniel McNeice came 70th with 684 points, and I came 169th with 425 points. In addition, Chris’s sister Carol and I were both picked for the random draw prize and walked away with $500 of prizes each.

As we drove back home to Canberra, we all agreed that Team Canberra Fishos needed to fish the Gold Coast Flathead Classic again next year. However, Susan McNeice will take my spot as I will be in Japan either in October or November in 2016. But I will definitely be coming back to fish this tournament again.

If you are interested in fishing the tournament next year, I highly recommend it. You will more than recoup your $225 entry fee from the lures and other goodies in the team show bag, commemorative shirt and the tournament dinners. Unlike Burrinjuck, the Gold Coast Sportsfishing Club engaged professional caterers as well as a professional photographer who provided all photos taken during the tournament free of charge. Some of those photos were used in this article.

Putting aside the ‘value for money’ analysis of the entry fee, I found the experience to be totally priceless. This trip is definitely up there among my most memorable fishing experiences and I learnt a lot more about catching Flathead. I would like to thank Chris Head for inviting Daniel and myself to take part in the Gold Coast Flathead Classic. I also commend the Gold Coast Sportsfishing Club for organising this great tournament.

For other stories about the Gold Coast Flathead Classic, try these links: