Smarter photos with your smart phone
Back

Smarter photos with your smart phone

Camera phones are extremely convenient and great for sharing photos with friends either by text message or e-mail and for instantly uploading onto social media such as Facebook. These days, most smart phone cameras come with a range of functions and aps that mobile phone cameras did not have only a few years ago. It will be interesting to see where this technology takes us in the next few years. Nevertheless, smart phone cameras have their limitations. In my experience with an iphone 4 and 5S, I have found that they take good quality close-up shots and wide angle scenery shots when there is good lighting. In some cases, they also take great panorama shots.

On the other hand, you will struggle to get a good shot of an animal in the distance or get a sharp image when attempting action shots. Photos are not that great on overcast days. In addition, the proximity of the flash to the lens in the iPhone pretty much often makes night shots a waste of time unless you can find a way to prevent the flash glaring in the corner of the photo.

You also have little room for error in composing a shot as the image resolution is usually insufficient to allow you to crop poorly composed photos on a computer. But if you work within those limitations, then you can take some great photos with your smart phone. 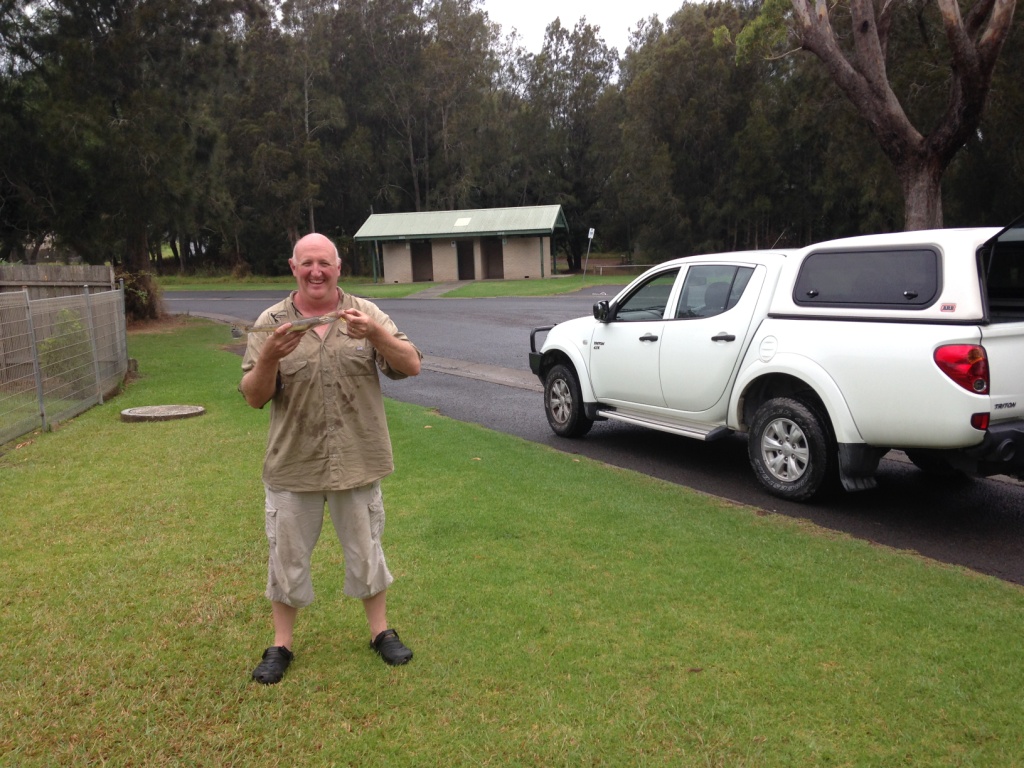 Quite often when someone hands you their camera asking for a snapshot of their capture, you probably have a number of distractions that might result in you taking a photo similar to this photo of John Bosch holding a 40 cm Flathead. For example, you might have got the boat off the ramp onto the trailer and you are eager to finish cleaning up and getting back home.

So you grab the camera and just take the photo from where you are standing and quickly point and click. In doing so, chances are the person in the photo is too far away from the camera and things in the background like the toilet block to the right John’s head get overlooked. 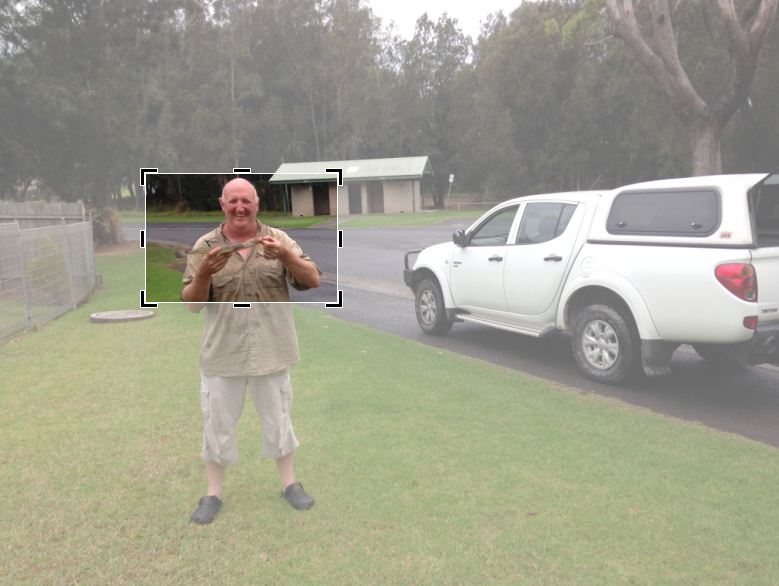 In most cases, you could salvage the photo by cropping the image if you were using a digital SLR or some of the better compact digital cameras. However, as you can see from the image below, smart phones leave little or no room for error. 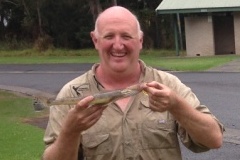 Even if there was sufficient image resolution in the photo, you still have the unsightly toilet block next to John’s head in this photo.

Taking photos of the fish

When you are taking a photo of a fish you just caught, then some simple steps to follow are: 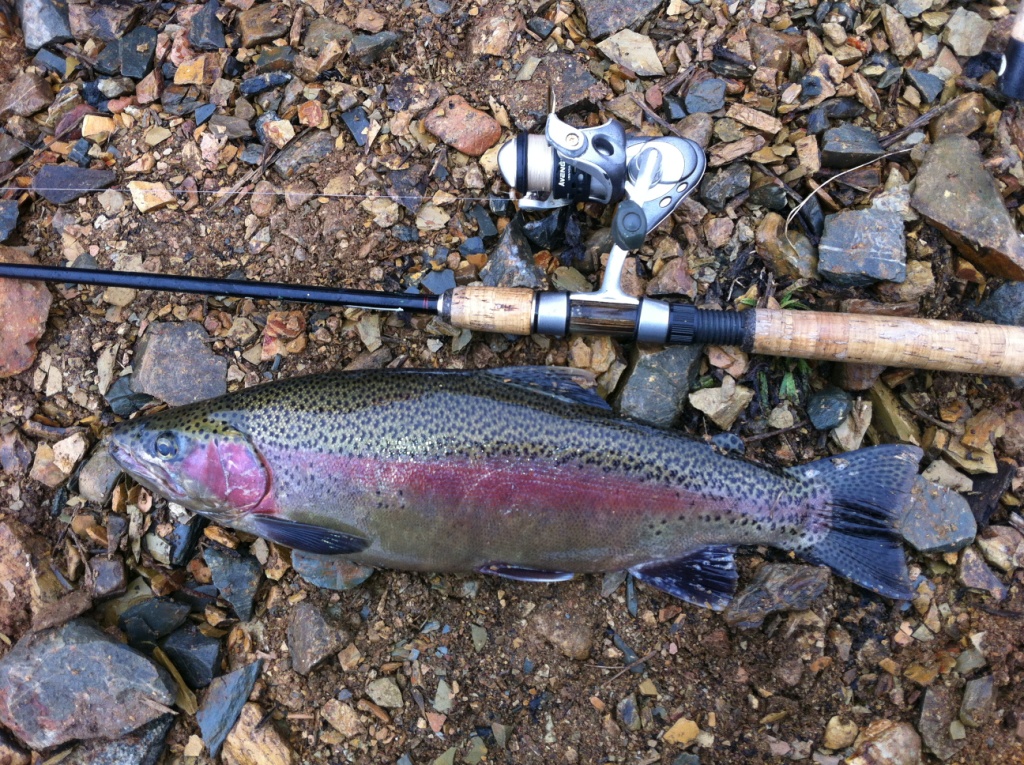 This trout blended in nicely with the bank when I shot this photograph.  While it's a great demonstration of a trout's ability to blend into the environment, placing the fish on a lighter coloured and more uniform background (like snow or a light coloured cloth or cutting board) would have made a better photograph. 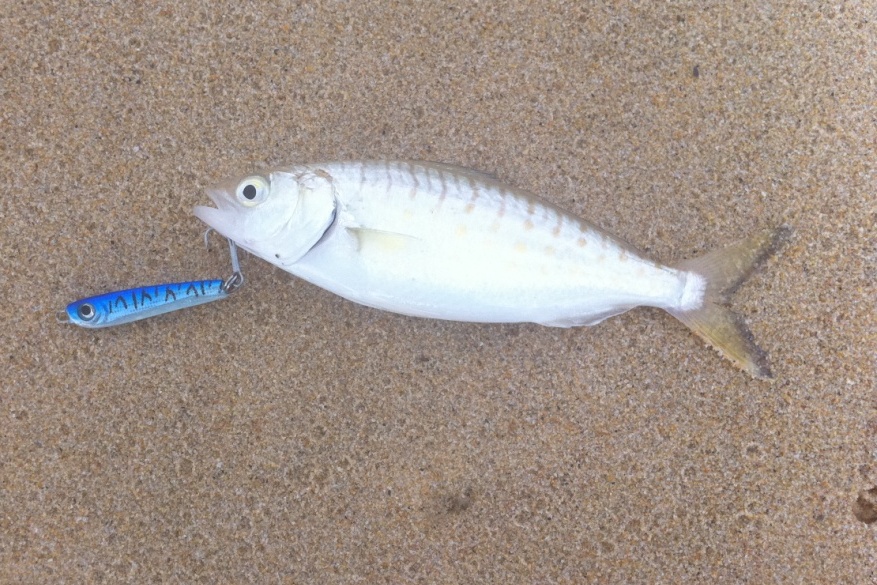 The wet beach sand makes a great background for most fish. However, silvery fish like this little salmon can act like a mirror for the camera flash or sunlight. 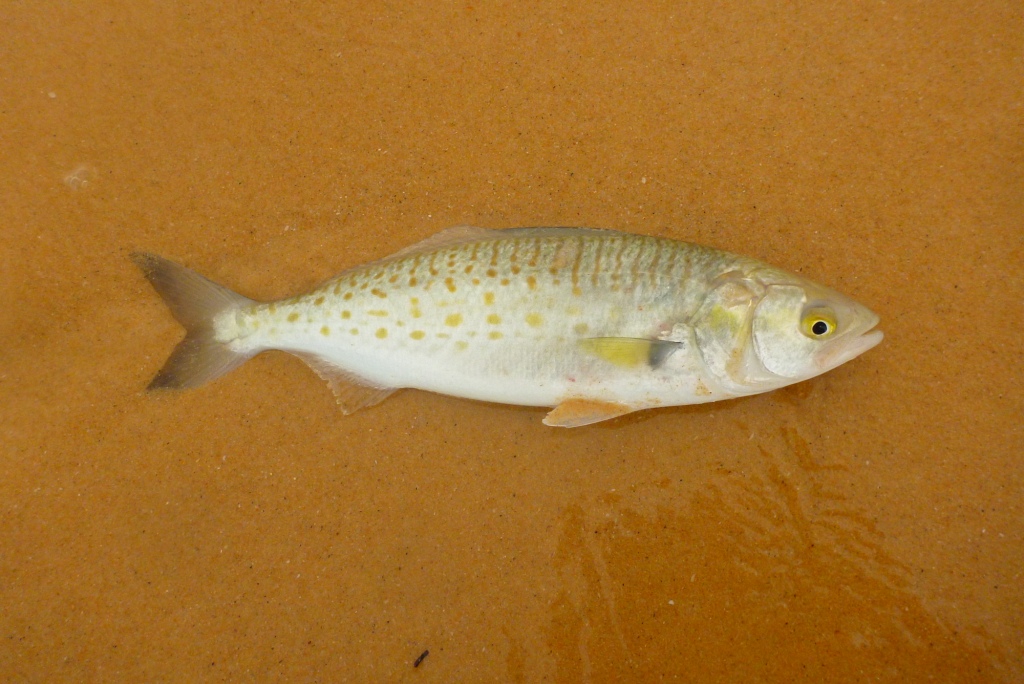 This salmon almost fills the frame, is still nice and fresh and has no blood dripping down its sides. The simple background ensures your eyes are not distracted from the fish. There is no glare of sunlight or the flash being reflected back onto the camera.

Taking photos of the angler and the fish

When you are taking photos of the angler and fish, then follow these simple steps: 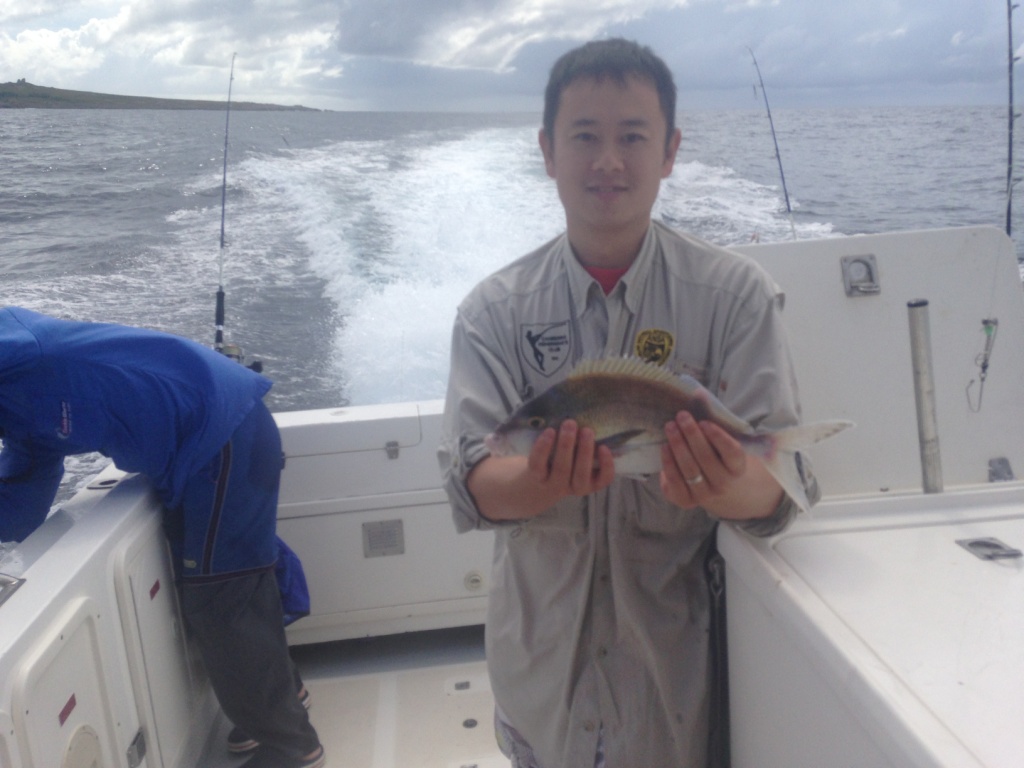 There can be a lot of distractions in the back ground when taking photos on board boats such as fishing gear, consoles or someone’s backside. This could have been avoided by getting Zane to stand against a less cluttered background and holding the camera closer to him to fill the frame. Finally, we can see more of Zane's fingers than the fish. 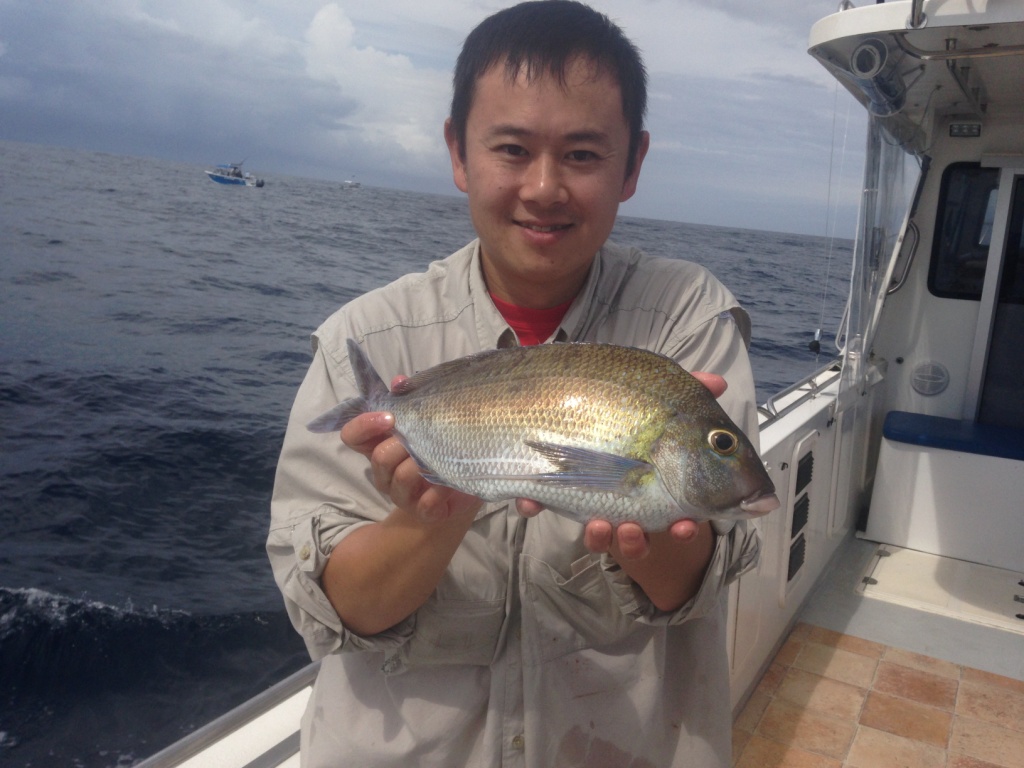 Here, Zane is standing against a less cluttered background, and is filling more of the frame compared to the previous photo. We also see as little of Zane's fingers as possible and more fish.

In addition, he is not standing against a sunlit background, which is why the previous photo looks a little washed out.

With these types of photos, there’s no hard and fast rule as to whether to shoot the photo in portrait or landscape orientation. As I said earlier, the aim is to fill the photo with the angler and fish so the best orientation will depend on which way best fills the photo.

These tips on are not hard and fast rules but will help get a better quality photograph. But for every rule, there is always a good excuse for breaking them. For example, a one hand grip can work well with the right pose. Taking a photo with the camera looking down on the angler rather than at eye level is not a bad option if you are over your optimum BMI like myself – just make sure you hold the fish towards the camera.

Taking a photo with the angler’s back to the sun (preferably in early morning or late afternoon) can light up the angler’s hair and give a great photo if your smart phone’s flash is strong enough to prevent the angler silhouetting in the sun. 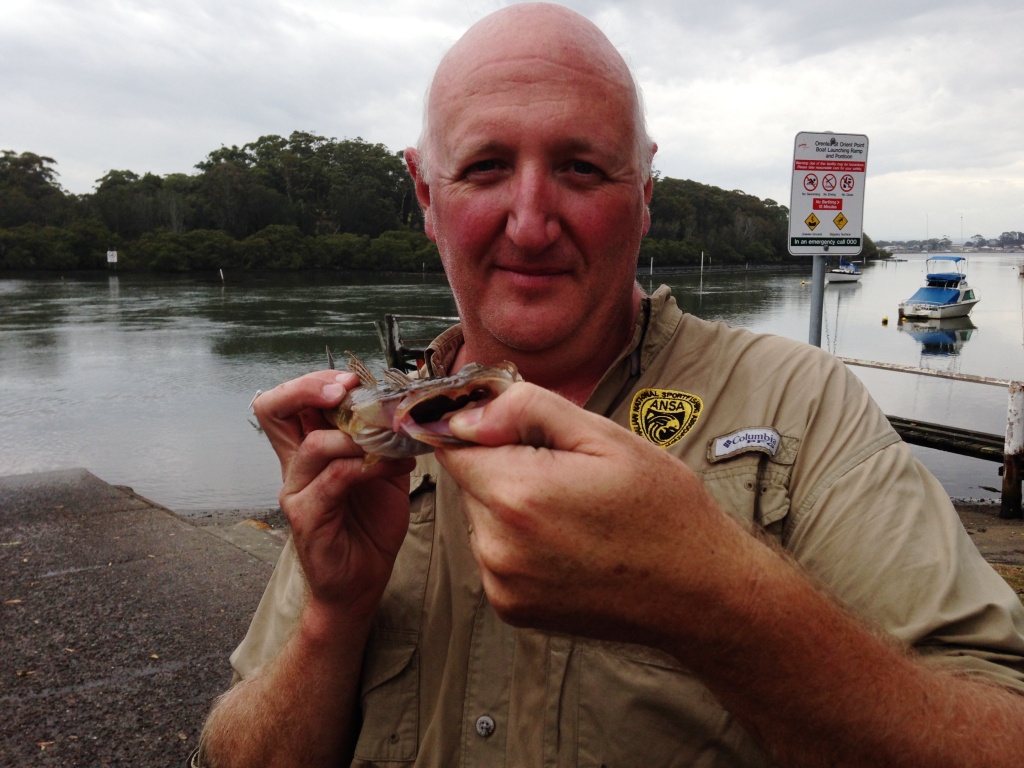 I notice some members face the camera holding their fish like a torpedo. This photo was obviously staged although I've seen quite a few photos like this.  Personally, I’ve never understood this technique as it tends to reduce the size of the fish in the photo and you don’t get to see the whole fish. If you must do the torpedo thing, then make sure it’s a decent fish and take some additional shots with the conventional holds. 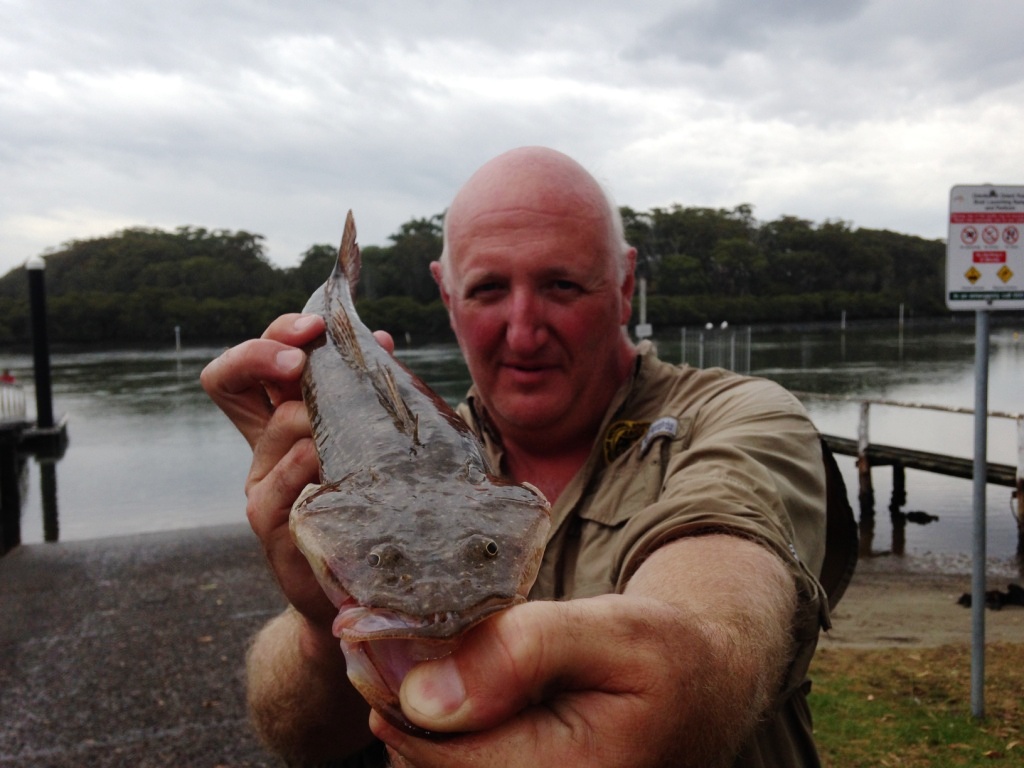 Having said that, I’ve seen some effective photos with the angler pointing the head towards the camera – I’ve not quite worked out how to replicate such shots but it appears the trick is to have fish held out towards the camera head first and angled so you can still see the rest of the fish. The resulting photo makes the fish look big compared to the angler and gives the photo a bit more dimension than a conventional grip and grin photo.  This photo with John holding a 40 cm Flathead is probably the closest I've ever got to mastering the torpedo thing.  John's face is slightly out of focus.  However, this seems to work in this photo as we are mainly interested in the fish, and there is enough detail to see who is holding the fish.  John might have been in focus had the photo been taken on a brighter day.  On overcast days, the the best way to get both the fish and angler in focus would be to use a digital SLR using a narrow aperture (or higher F-stop).

One final tip: how you hold your smart phone when taking photos is important.

The typical way most people operate their smart phone is to hold it upright and operate with one hand. However, I suggest that if you want to use your smart phone as a camera, then hold it like a camera. Unless you are doing a selfie, then always use two hands to hold the camera. Using both hands helps keep the camera level and also keeps it steady to reduce blurring of photos due to camera shake.

In addition, do not grip the camera tightly or hold it out with outstretched hands as both will cause camera shake. Keep your fingers away from the front of the camera to prevent fingers creeping into camera's field of view. If your smart phone has a case with a lens cover on it, take care to ensure the photo is not partially obscured by the cover.

Finally, get yourself accustomed to holding the camera horizontally rather than upright. While there is nothing wrong with shooting photos in portrait compared to landscape orientation, you always need to consider whether a landscape or portrait orientation will produce a better photograph. There is a real danger you will default to portrait orientation every time you take a photo simply because of the way smart phones are designed to be held.

Smart phones cannot compete with digital SLRs and most compact digital cameras for photo quality. One thing you might have noticed in the photos taken on overcast days is that the photos are a little dark.  The tiny lens on the Smart Phone only allows a limited amount of light on the image sensor, compared with larger lens on a digital SLR.  The digital SLR will outperform a Smart Phone on overcast days for this reason.  Nevertheless, you can take great photos by following the basic tips I’ve outlined in this article. And naturally, these tips are equally applicable to digital SLRs and compact digital cameras.

All photos except the photo of the larger salmon on the yellow sand were taken with an iPhone 4 or iPhone 5S.  Many thanks to John Bosch and Zane Zhao who allowed me to take some deliberately bad shots.