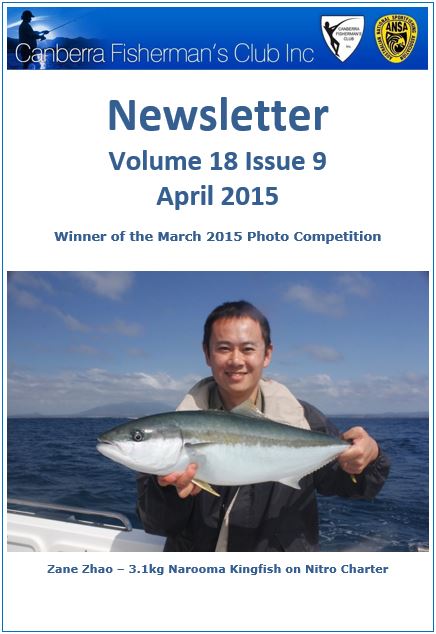 Well as they say, the best laid plans... and that was indeed the case for me for the St Georges Basin outing, was looking forward to a good fishing session but the lurgy got me on the Thursday afternoon and I was history for a few days so ended up having to miss out. Wendie even said that I must really feel crook not to go fishing because I usually push myself through the pain, out of bed and by the first cast, feel a whole lot better but this time I just could not do it.

The outing was well attended with a few good captures but mother nature once again had other ideas and from what I was told most only fished till about 3pm on Saturday when the rain came in and the Sunday was a total blow out so apparently there was a bacon and egg cook off before people headed home. Anthony will expand on the outing in his article later on in the newsletter.

Read the April 2015 edition of the Canberra Fisherman's Club Newsletter